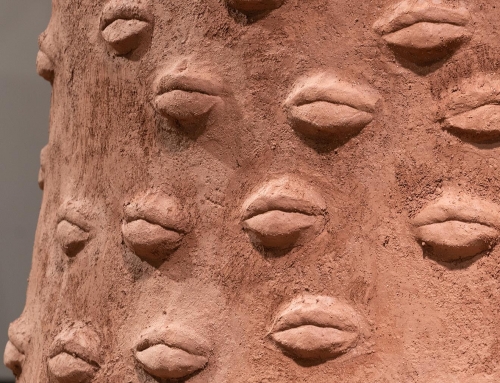 Chicago-born, New York-based Simone Leigh creates objects that occupy the liminal space between figuration and abstraction. In recent years, Leigh has become increasingly recognized for her large-scale ceramic and bronze sculptures, which feature braided vessels and skirted body-like forms. Rendered at a scale that is often larger-than-life, the stand-alone sculptures are frequently installed alongside architectural installations. The work is defined by a combination of materials—such as clay, bronze, and raffia—traditionally associated with African art, yet which draw from a global array of references. Leigh’s work manifests the experiences and social histories of subjects often omitted from colonial narratives in a kind of autoethnography that is equally attuned to individual perspectives and collective structures. While her ongoing project is broadly concerned with the epistemologies of black women, her figures extend beyond the representational, and result from extended research into her materials and their histories.

New ceramic sculptures in the exhibition include large, bulbous, bottle-like vessels and a bell-shaped figure that is both monumental and intimate. These works can be read in association with the face jug pottery made by nineteenth-century African-Americans enslaved in the South. Leigh’s interest here follows the belief in the sacred value of these vessels, which many believe served as power objects for spiritual protection and the guarding of domestic spaces.

Perhaps the best known of the artists associated with Edgefield Pottery in South Carolina––the primary venue for the production of the face jugs––was the potter and poet David Drake, who worked there until the late 1870s. Drake labored in secret to produce and fire enormous stoneware pots signed with only his first name and inscribed with original poetic verses often drawing from pages of the Bible and musings to the cosmos. Proceeding in dialogue with Drake’s example, Leigh crafts vessels to channel the power of his materialized responses to the conditions in which he lived––conditions that, though changed in some ways, persist in other ways, both subtle and overt.

Another new sculpture combines a ceramic component in the form of a woman’s head and torso with a large, dome-like skirt covered in raffia palm leaves. At once a meditation on vernacular architecture (the skirt can be read as a repurposed hut) and an essay in varied textures, colors, and visual rhythms, the work poses questions about Modernism and the relationship between the black female body and the encompassing physical, social, and historical environments in which it appears. By returning to certain materials and typologies over time and in different contexts, Leigh establishes an open-ended landscape of forms that registers subtle changes in perspective and scale.

As such, she often incorporates architectural interventions in her exhibitions, as she does here in a large-scale installation that occupies one of the gallery’s corners and a majority of one of its walls. A caged steel frame also overlaid with raffia leaves, the work transforms a metaphorical reference to the traditional oval Rondavel grass huts in sub-Saharan Africa or the Mousgoum dwellings in northern Cameroon and Chad into an object that exists somewhere between functional housing and minimalist sculpture. Though there is no door for entry, it evokes, albeit conceptually, the possibility of communal gathering in a space that otherwise privileges singular acts of viewing.