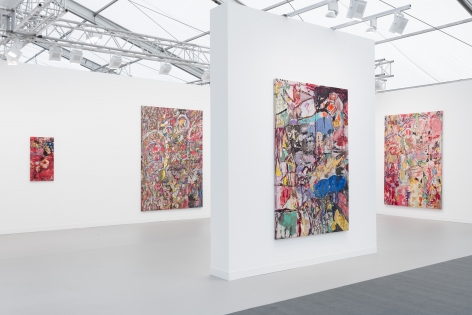 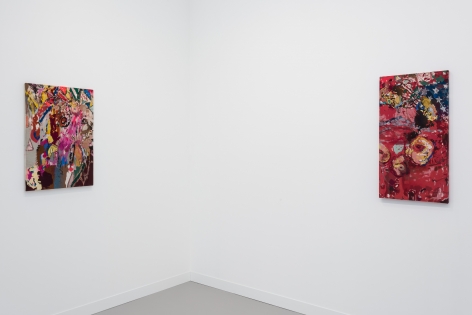 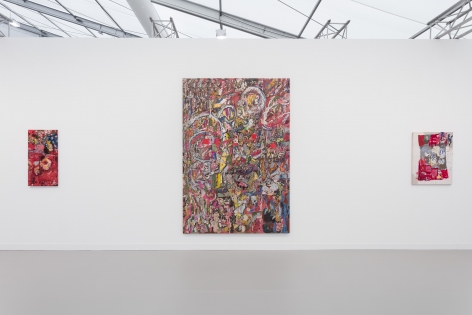 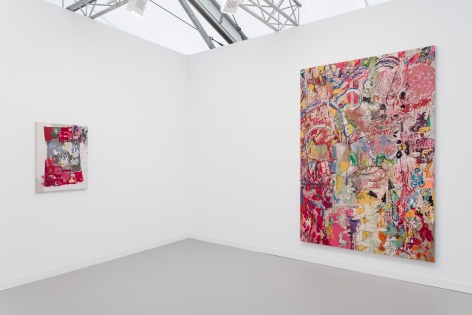 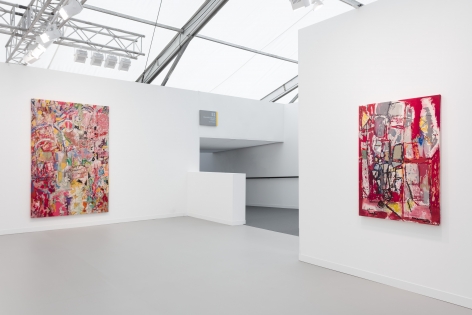 David Kordansky Gallery is pleased to participate in Frieze London 2019 with a solo presentation of new paintings by Ivan Morley. Employing unorthodox materials, supports, and techniques, Morley makes paintings that both celebrate and undermine the medium’s major narratives, and that directly utilize its role as a carrier of social and cultural histories. The presentation includes examples of works made in a variety of different ways, including embroidered thread on canvas; painting on glass; and a process that involves applying oil paint to glass before lifting it off intact, like a skin, and adhering it to a panel. Works on view pertain to several of Morley’s ongoing groups, each of which emerges from its own torqued mapping of territories in the psychogeography of California. Among them are several of the artist’s largest paintings to date.

The majority of the Frieze presentation is dedicated to Morley’s continuation of a group of paintings titled Fandango first shown in his 2018 solo exhibition at David Kordansky Gallery. Fandango is prompted by the artist’s reflection on Olvera Street––both a real and a quasi-mythical place at the heart of old downtown Los Angeles––and on a strange confluence of lore associated with modernist painting and Mexican muralism, California’s colonial past, nineteenth century social life in the Old West, and latter-day impressions of a changing city. Revisiting these ideas, Morley’s latest works come armed with an expansive array of personal connections, fragments of written language generated while executing the work itself, recurring figurative images such as ducks or reclining nudes, and abstract forms by which his project generates its own momentum, evolving according to its own, recognizable visual-conceptual logic. As John C. Welchman notes in an essay that will appear in a forthcoming monograph dedicated to the artist’s work, “For Morley… the textual and the sensational are subject to unique forms of mutual modification, and even code sharing, an alignment that puts more at stake in the signifying process than conventional arbitrations between word and image or form, material and sensory apprehension.­­”

That Morley recasts the terms by which painting is ordinarily understood to operate, and that the artists whose work perhaps best help contextualize his own are not painters at all (figures like Mike Kelley most readily come to mind), takes nothing away from the fact that he conjures such painterly pleasures from his materials. In the thread-on-canvas paintings, for instance, visual subtleties unfold on a stitch-by-stich basis. As a result, abstraction takes place at several orders of magnitude, and even seemingly monochromatic passages are filled with detailed patterns of color and texture that reveal themselves upon close viewing. Morley’s procedures introduce a degree of distance between the energy of his marks and the painstaking means by which they are inscribed, but they also paradoxically foster a level of tactility and physical intensity that make the paintings vibrate in physical space like just-struck bells. Their reverberations contain extrasensory information too. As official accounts and pseudo-histories, observations and memories, and fictions and meta-narratives all slowly reveal themselves in the works’ dense compositions and complex surfaces, life’s contradictions emerge in all their fullness: public and private, suffused with language and beyond the reach of rational comprehension, forever leaving history behind in its wake while staying rooted in the eternal present.